In the 1890s, Rowland H. Macy moved his department store from 14th Street and 6th Avenue to 34th Street and Broadway. To give himself the option of expanding his store to 35th Street, Rowland offered $250,000 to Alfred Duane Pell for his plot of land on the corner.

Before the deal was finalized, Henry Siegel offered Alfred $375,000 for the corner. Alfred accepted.

Henry owned 1/2 of the Siegel-Cooper Dry Goods Store which filled an entire block of 6th Avenue from 18th to 19th Streets. (The world’s largest store until the Macy’s at Herald Square was completed). He considered putting a women’s clothing store on his newly acquired plot of land next to Macy’s, but his planned 12 story building was too large for the little space.

He, then, came to Rowland with a deal. Henry would give his land to Rowland if he would terminate his lease on the former Macy’s location at 14th Street and 6th Avenue. Rowland declined. In fact, the Macy family continued to pay out the lease on the empty building until 1903 so that Henry couldn’t acquire it. When the lease was up, Henry tore the old Macy’s down and built a 10 story building in it’s place. He called it the 14th Street Store.

The new Macy’s in Herald Square was 1.6 million square feet and opened in 1902. The new building hugged Henry’s existing building on two sides. 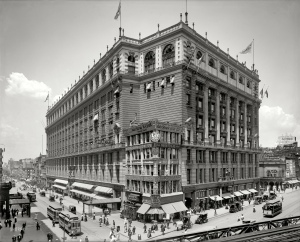 In 1903, Henry tore the current building down and built a 5 story structure on his land. It was rented by the United Cigar Store. Henry also rented advertising space on billboards on and above his building. He sold the building to Robert Smith in 1907. Robert sold the building in 1911 for $1 million. Macy’s has never owned the building.

In 1945, the Rockwood Company acquired the building and Macy’s began advertising on their billboards. To his credit, Henry never advertised his own store on this building.