Six nuns arrived in Santa Fe to open a girls’ school. The Sisters of Loretto opened the Loretto Academy in 1853. 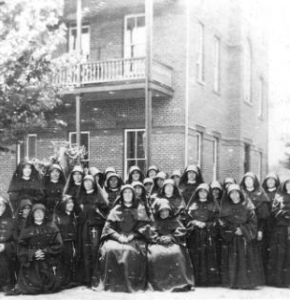 In 1873, they began building a chapel on the grounds of the academy. They hired Antoine Mouly to design the building.

As the building was nearing completion, Antoine died. He failed to design a staircase that would allow the Sisters to get from the chapel to the choir loft 20 feet above.

The area was too small for a traditional staircase and, though common, the nuns couldn’t use a ladder to access the space because of their attire. 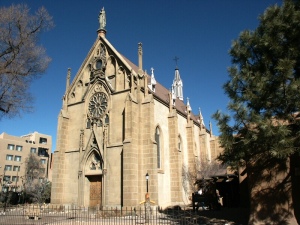 They began a novena to St. Joseph, the Patron Saint of Carpenters. A novena is a 9 day long prayer session.

On the last day of the novena, legend says, that a man knocked on the door of the chapel looking for work. He was a carpenter. The Sisters showed him the space.

Other builders had told the nuns that there was no solution to their problem, but this stranger said he could help them. His conditions were that he needed to work in complete privacy.

Using only hand tools, he constructed what is now known as the Miraculous Staircase. 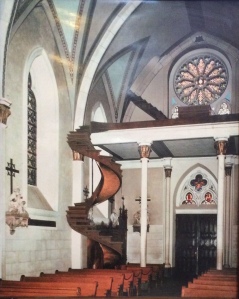 There are no nails used in the construction of the staircase, only wooden pegs. (This has aided in the longevity of the structure because the pegs expand and compress with changes in the temperature in the same way as the wood.). The wood is a spruce found only in much colder climates than New Mexico.

The circular staircase completes two 360 degree turns and has no visual means of central support. All of the weight of the entire staircase is supported by the bottom step. 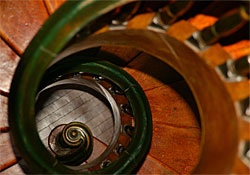 The Sisters began to believe that the carpenter had, in fact, been St. Joseph who had come to answer their prayers. They began to tell others that the staircase truly was a miracle.

They told the story of how the carpenter arrived at their doorstep, built the stairs and then left without payment. The nuns swore that they didn’t even know his name.

A railing was added to the stairs 10 years after their construction for safety. A bracket now attaches the staircase to the wall. This was done because those that climbed the staircase felt it was too “springy.” 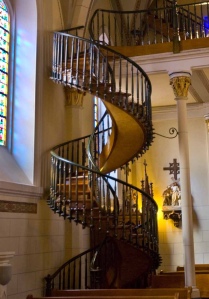 This bracket has actually caused damage to the staircase because the stairs do, in fact, act like a kind of spring. They are supposed to.

Vibrations caused by vehicles passing by the chapel have also caused some damage to the almost 150 year old staircase.

Engineers and stair builders have discovered that the Miraculous Staircase is no miracle at all. It is just an extremely well-crafted example of physics at work. They did however note, that the creator was a master and, that even with modern tools, building the staircase would have been quite a feat.

In 1984, a book entitled, “Loretto: The Seven Sisters and Their Santa Fe Chapel” claimed that there was proof that French Architect Francois-Jean Rochas came to Santa Fe after hearing about the need for the staircase and that he was the mysterious craftsman. 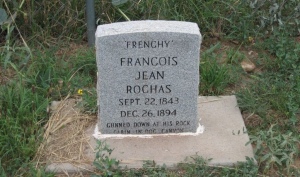 The chapel is now a museum and wedding venue, but the staircase is not accessible to the public.