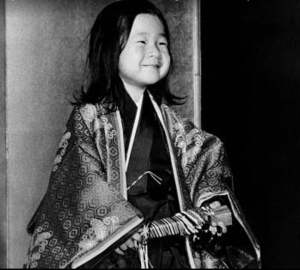 Michiko Shōda was born October 20, 1934 in Tokyo. She married Crown Prince Akihito on April 10, 1959. Her father was the wealthiest flour and noodle maker in Asia, but they did not have royal or aristocratic connections. She was the first commoner to officially become a member of the Japanese royal family. 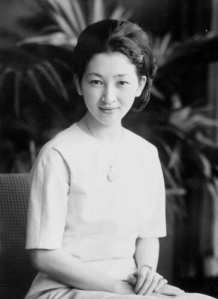 She became Empress on November 12, 1990. Princess Nori has two brothers, Crown Prince Naruhito (who will become Emperor) and Prince Akishino. 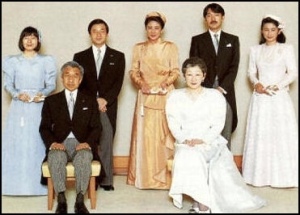 The Empress broke tradition by choosing to raise her children with her husband. It was common for royals to be separated from their children who were raised by the court chamberlains and tutors. Empress Michiko was the first Japanese Empress to breastfeed. 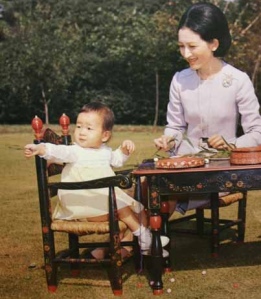 There is extreme social pressure on the Japanese royal family. Empress Michiko and her daughter in law, Crown Princess Masako, have both suffered severe bouts of depression due to the stresses of their official positions. It is reported that the Empress was affected greatly by the disapproval of her mother in law. The Crown Princess, on the other hand, is under scrutiny because she and her husband have yet to produce a male heir. 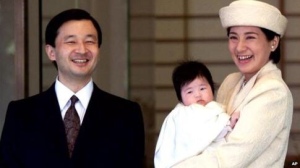 While some would see it as a dream to marry into a royal family, Princess Nori always knew that marriage would be the end of her official connection to the royal family.

According to the Imperial Household Law of 1947, Princess Nori had to give up all rights, privileges and titles given to her as a member of the royal family when she married. She would become a commoner. 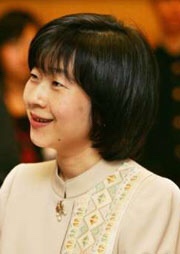 Each year, on her birthday, Princess Nori was interviewed by the Japanese press. Each year she was asked the same question, “When are you going to get married?” They continued to ask even after she politely requested for them to stop.

Princess Nori was a role model to Japanese women who were unmarried and in their 30s, many of which also still lived at home with their parents. She graduated from Gakushuin University and the Department of Japanese Literature.

She went to work as a researcher at the Yamashina Institute for Ornithology and specialized in the study of kingfishers. She also helped to train seeing eye dogs for the blind. 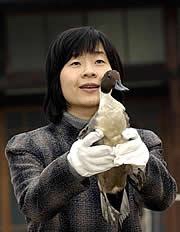 She was 35 years old before she agreed to marry Yoshika Kuroda in 2004.

Princess Nori had known Yoshika since she was a child. He was friends with Prince Akishino and the two went to university together. Yoshika worked as a town planner for the Tokyo metropolitan government. 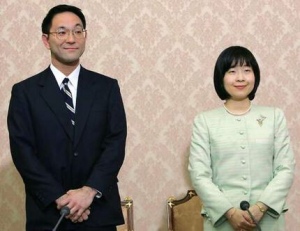 Instead of buying her an engagement ring, royal custom required an offering of fish. Yoshika presented his future wife with two sea breams in March of 2005, sealing the deal.

Princess Nori was the first daughter of an emperor to give up her position and marry in 45 years. She was 36 years old and her groom was 40. The couple married on November 15, 2005. 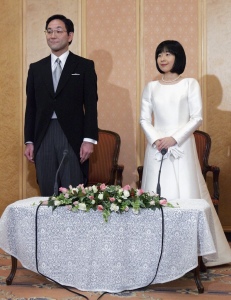 The Emperor and Empress broke protocol by attending the wedding. They did not attend either of their sons’ weddings. Princess Nori wore a western style dress at her wedding. Before the big day, she practiced for domestic life by going grocery shopping for the first time.

Princess Nori did receive a considerable pay out from the Japanese government when she severed ties with the royal family. She was given the equivalent of $1.5 million. Yoshika lived with his mother until his marriage, so the newlyweds spent a portion of this money on a condominium in Tokyo.

The former princess is now officially Sayako Kuroda. She quit her job as a researcher and began working as the assistant to her aunt Atsuko Ikeda, the sister of the emperor, who also renounced her connection with the royal family when she married. She was the Highest Priestess of the Ise Shrine.

In 2017, Sayako became the Highest Priestess. This position has alway been filled by a current or former member of the royal family. 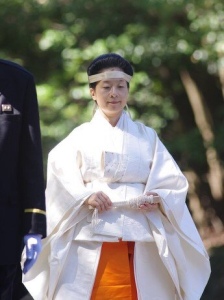 Sayako has attended a few functions at the Imperial Palace since her marriage, including the State Banquet in 2016 to celebrate the Belgian State Visit.

One thought on “Princess Nori”