From 1854-1929, Orphan Trains carried orphaned and homeless children from overcrowded eastern cities, such as New York City, to foster homes in the rural midwest. Approximately 200,000 children traveled to new homes during this time.

In the 1850s, there were approximately 30,000 homeless or abandoned children in New York City alone. The population of the city at the time was only about 500,000.

Children were orphaned or abandoned for a number of reasons, such as deadly disease, poverty or addiction.

These children did what they could to survive. They sold matches or newspapers to earn money for food. Some formed or joined street gangs for protection.

In 1853, Charles Brace founded the Children’s Aid Society. When the number of children needing homes became too much for the group, Charles had the idea to send them out of the city.

Charles believed that families living on farms would be willing to take in these children. These kids needed homes and these parents needed help to work the land. Charles also believed that rural families were more moral and religious than those living in the big cities.

At first, the Children’s Aid Society sent children to Connecticut and Pennsylvania. When these placements were deemed successful, the group planned for their first long distance trip in September 1854.

The name, Orphan Train, is deceiving. Less than 1/2 of the children on the train were actually orphans. It is estimated that 1/4 of these children had 2 living parents. These children ended up abandoned because their families couldn’t afford them or they ran away from home, many due to abuse. 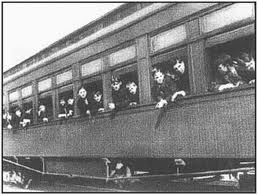 The first long distance Orphan Train arrived in Dowagiac, Michigan on October 1, 1854. 15 children were adopted there. The train traveled city to city and all but 8 of the children on this first train were adopted. Those that weren’t taken in were sent to an orphanage in Iowa City, Iowa to be placed in foster homes there.

There were a few rules that adoptive families were supposed to adhere to:

Legal adoption was not required, but all placed children were to be treated like the natural born children of their new parents.

Boys less than 15 years old were to be sent to school until they were 18. When they moved out, they were to be given $100.

Older boys were expected to work. All boys, or their new families, were to write to the Children’s Aid Society once a year to update them on the boy’s progress. 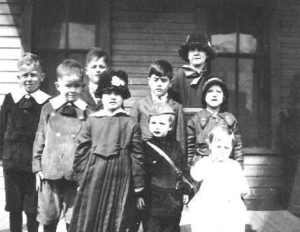 There weren’t enough workers to follow up on all the children placed by the society, so these rules were not always followed.

An average of 3000 children per year traveled on the trains. They were sent to 45 states, as well as Canada and Mexico.

The Orphan Train movement ended for a number of reasons. As the midwest was more settled, the need for children to work on farms declined. Larger cities like Chicago, Cleveland and St. Louis began to have their own issues with abandoned and orphaned children and began to try to place them in foster homes. Some states outlawed the adoption of out of state children. Charities and government agencies were also created to help families financially so that they could keep their children.

Estimates are that, today, 1 in 25 Americans is related in some way to an orphan train rider. There is a museum in Concordia, Kansas dedicated to telling the stories of these children.

You can read some of those stories here:

One thought on “The Orphan Trains”