Rabies is a virus.

Infection occurs when an infected animal scratches or bites another animal or human. Another way to spread the virus is getting infected saliva in the eyes, nose or mouth. Dogs most often contract the virus, but humans in the Americas are more likely to contract Rabies from a bat than a dog. Bat bites can go unnoticed. Treatment must be sought before symptoms begin or the the virus is almost always fatal.

Symptoms typically appear within the first 3 months of infection. The first symptoms are fever and headache. After that, inflammation of the brain occurs, altering the behavior of the infected. Paralysis can occur and can be accompanied by anxiety, insomnia, agitation, paranoia and hallucinations. Originally, Rabies was called Hydrophobia because it often causes the infected to fear water.

Despite their fear of water, the infected often have an unquenchable thirst but have difficulty swallowing. Attempting to drink can cause throat spasms. The virus produces a large amount of saliva. This, mixed with aggression, is how the virus alters the behavior of the infected in order to spread the virus to other animals.

Once symptoms begin, death usually occurs in about a week.

There are two forms of Rabies. The most common is Furious Rabies. Less common is Paralytic Rabies. 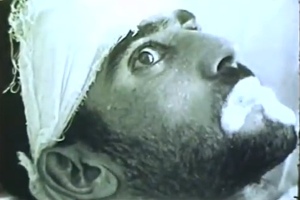 Human to human transmission of Rabies is rare because humans usually seek treatment, and are quarantined, after being bit by an animal. Transmission can, and has, occurred in organs transplanted from an infected person. The most well-documented case of this occurred in 8 organ recipients that all contracted the virus.

The Rabies vaccine was developed in 1885. Rabies has been eradicated in the United Kingdom. Attempts to vaccinate non-domesticated animals has been successful in Asia and Africa. In Ontario, Canada, oral vaccines were dropped during a vaccination campaign to curb Rabies in the raccoon population and was successful.

Treatment of the infected can prevent the disease within the first 10 days of infection. Washing the wound immediately is effective in reducing the amount of disease that spreads through the nervous system.

The course of treatment for someone who is suspected to have rabies includes 5 shots and is very expensive.

Less than 20 people have ever survived Rabies once symptoms presented. One of these people was Jeanna Giese, who was put into a medically-induced coma and given anti-viral drugs in 2004. This treatment is called the Milwaukee Protocol. Despite her success, this treatment only has an 8% survival rate and is not recommended for the treatment of Rabies.

The first writing about Rabies was in 1930 BC. Ancient peoples believed that Rabies originated in the tongue. One treatment was to remove the tongue. This was unsuccessful.

The word Rabies comes from the Latin word for madness.