The Silver Bridge was a suspension bridge that connected Point Pleasant, West Virginia to Gallipoli, Ohio. The bridge was built in 1928.

Just after 5pm on December 15, 1967, Charlene Wood pulled onto the bridge. She was pregnant. She heard a noise and the ground began to shake. Ahead of her, she saw the bridge start to collapse. The car in front of hers fell into the 44 degree water.

She put her car in reverse and pulled off the bridge just in time.

Rudy Odell was a State Trooper called to the scene. He could hear the people in the water calling for help. He was too far away from the water to do anything.

46 people were killed and 31 cars plummeted into the water. It took over two weeks to recover the bodies. 2 were never found.

At the time of the collapse, approximately 4000 cars crossed the bridge each day.

Suspension bridges like the Golden Gate Bridge use steel wire cables. The Silver Bridge was constructed using eyebars. The method was less expensive, but would be the cause of the tragedy. 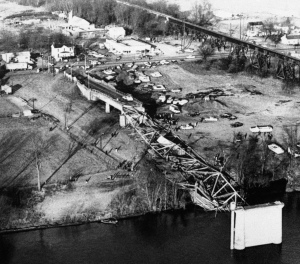 Eyebars are long steel plates. The ones on the Silver Bridge were 2 inches thick and 12 inches wide. The shortest ones were 44 feet long. The longest were 55 feet.

After the collapse, President Lyndon Johnson commissioned the Task Force on Bridge Safety. They discovered a 3 millimeter stress crack in one of the eyebars that would have been nearly impossible for maintenance crews to identify during inspections. It was hidden and would only have been notice if the entire joint was dismantled.

Bill Needham and Robert Towe were on the bridge in their work truck when it collapsed. It fell into the water. Bill climbed out of his windows and swam to the surface. He clung to a box floating on the surface of the water until he was rescued. He was in the water for 15 minutes. Robert did not survive.

The Silver Bridge Collapse killed more people than any other bridge disaster in history.

The disaster at Silver Bridge led to the creation of National Bridge Inspection Standards.

People in Point Pleasant blamed a mythical creature called the Mothman for the bridge’s collapse. Sightings of the creature began the year before the collapse and several witnesses claimed to have seen him the day of the collapse.

Point Pleasant is the home of the Mothman Festival and a large statue of the creature. The Mothman legacy has spawn books and movies.