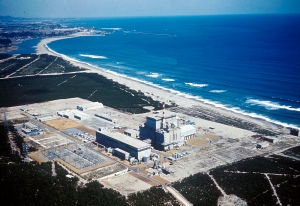 Hisashi Ouchi, 35 years old, Masato Shinohara, 39 years old, and Yutaka Yokokawa, 54 years old, were working at the JCO nuclear fuel processing plant located inside the Tōkai-Mura Nuclear Power Plant. Ouchi and Shinohara were mixing a batch of fuel containing uranium in a stainless steel tank while Yokokawa was sitting at a desk 4 meters (just over 13 feet) away. Suddenly, there was a blue flash as the mixture experienced a nuclear reaction emitting neutron radiation and gamma-rays.

The mixture was able to reach critical mass due to a number of factors. First, the maximum amount of uranium allowed in the mixture was 2.4 kilograms. When the reaction occurred, there were 16 kilograms of uranium in the mixture. Second, these men had no training in this level of enrichment of uranium for fuel as this was the first time this process had been attempted in this factory in three years. Also, the plant was only inspected two times a year by the state regulator. It had never been inspected while the plant was in operation.

Ouchi, being nearest to the tank, was blasted with 17 sieverts of radiation. This is possibly the highest dose of radiation any human has ever experienced. Shinohara received 10 sieverts while Yokokawa received 3 sieverts. 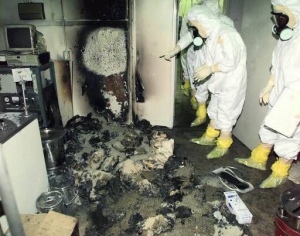 At the time, Japan limited workers’ exposure to radiation to 50 millisieverts a year. 8 sieverts is considered a lethal dose of radiation.

Nuclear Radiation 101: Nuclear radiation affects the atoms in our bodies by removing the electrons. This breaks the bonds between atoms, including DNA and water in our bodies, damaging them. If your DNA gets damaged enough, cells can’t replicate and they die. Those that can still replicate, create more damaged cells. When damaged cells multiply, it creates cancer.

The effects of the radiation on Ouchi were immediate. He was in pain and couldn’t breathe. He vomited into the tank and lost consciousness in the decontamination chamber. 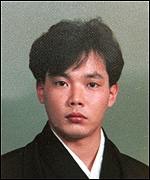 Shinohara turned to run but only made it about 3 steps before he collapsed.

Upon arrival at the Mito hospital, Ouchi’s skin was red and puffy but he showed few other outward signs of his condition. Then doctors began tested his chromosomes. They had “shattered like glass.” They could not be identified or arranged. Without chromosomes, his cells could not regenerate and his body could not heal. His white blood cell count was 0. 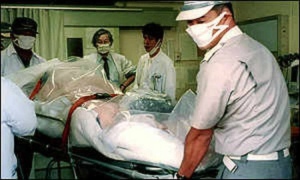 It was estimated that the amount of radiation Ouchi’s body experienced was similar to that at the epicenter of the atomic bomb dropped on Hiroshima. The radiation destroyed his DNA and immune system.

The plant was still in criticality. Radiation creates heat so the steel tank used to mix the fuel was soaking in cool water. This cooling of the tank helped to prolong the nuclear reaction which lasted intermittently for 20 hours. Eventually, workers were able to drain the water, allowing the mixture to heat up and the reaction to cease. Then a solution of boric acid was added to the fuel mixture. Boric acid acts as a neutron absorber. 27 workers were exposed to additional radioactivity in this process. A shield had to be put in place around the tank to keep gamma radiation from affecting people outside of the plant.

310,000 people within 6 miles of the plant were ordered to stay indoors and people living within 350 meters (just under a 1/4 mile) were evacuated. Although it would take 5 hours before this evacuation was ordered. They were allowed to return after 2 days.

There was no critical accident alarm at the facility. When the accident first occurred, other workers were unaware of the emergency. After they were made aware, there was confusion as to whether or not the danger had passed. This led to three members of emergency personnel being unexpectedly exposed while trying to rescue the workers inside.

Because the plant was not included in the National Plan for the Prevention of Nuclear Disasters, immediate protocols for the protection of individuals outside of the plant were not in place. Workers at a lumber yard very near the plant were not evacuated until 3pm, 4 1/2 hours after the reaction.

Yokokawa, Ouchi and Shinohara remained in the hospital.

On day 6, Ouchi was placed in a sterile room at the University of Tokyo Hospital. He needed a peripheral cell transplant (this had never been done before) so that he could begin generating white blood cells again. His sister was a match and donated the cells for transplant.

After one week in the hospital, he began to show outward signs of radiation sickness. His skin began sloughing off. Because his cells couldn’t regenerate, no new skin formed to replace it. He again began to have difficulty breathing. Ouchi said, “I can’t take it anymore. I am not a guinea pig.” He was in extreme pain despite medication. At this time, he was put on a ventilator and kept in a medically induced coma.

On day 18, Ouchi’s white blood count returned to normal. It appeared that the transplant had been a success, but a week later tests showed that the radiation was attacking the transplanted cells as well.

On day 27, Ouchi’s intestines started “to melt.” Three weeks later, he started hemorrhaging. He began receiving blood transfusions, sometimes as many as 10 in 12 hours. He began losing a significant amount of fluids (10 liters, or over 2 1/2 gallons, a day) through his skin so they wrapped him completely in gauze. He was bleeding from his eyes. His wife said that it looked like he was crying blood. Ouchi started receiving daily skin transplants using artificial skin, but they wouldn’t stick. His muscles began falling off the bone. 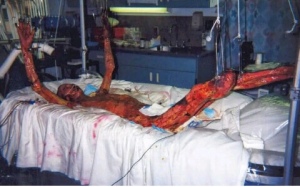 On his 59th day in the hospital, his heart stopped three times in just 49 minutes. He was resuscitated. This severely damaged his brain and kidneys. At this point, Ouchi was on life support.

Doctors continued life saving measures but Ouchi died of multi-organ failure on December 21, 1999 after 83 days in the hospital.

Shinohara seemed to be getting better. On New Year’s Day 2000, he was taken in his wheelchair to visit the hospital gardens.

However, in late February 2000, Shinohara contracted pneumonia and the damage to his lungs from the radiation meant that he needed to be put on a ventilator. This prevented him from speaking, so he had to write messages to nurses and family. Some of the last words written by Shinohara were “Mommy, please.”

Yokokawa stayed in the hospital for six months. He was then released to recover at home.

In reaction to the accident, which was found to be completely the result of human error, the Tōkai-Mura power plant was fully automated and fitted with neutron monitoring equipment. Tōkai-Mura had a history of taking shortcuts and putting their employees at risk to speed up production. The deaths of Ouchi and Shinohara were the ultimate penalty for their carelessness.

One year after the devastating accident, 6 employees were arrested and charged with negligence. One of the 6 was Yokokawa who claimed he “forgot” or was not aware of the dangers in the plant. He pled guilty.

At the time, Japan generated approximately 1/3 of its electricity from nuclear power.