Robert “Bobby” George Pickett was born February 11, 1938 in Somerville, Massachusetts.  Growing up, he watched a lot of films at the movie theater his father managed. He became very good at impersonating famous actors, most notably, Boris Karloff.  Bobby died of leukemia in Los Angeles, California on April 25, 2007. He was 69 years old. 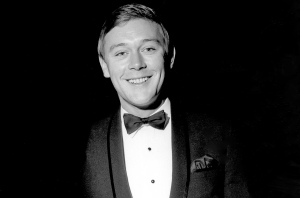 William Henry Pratt was born November 23, 1887 in Surrey (now London), England to Edward and Eliza Pratt.  His mother’s sister was Anna Leonowens, on whom The King and I was based.

His parents both died when William was young and he was raised by his siblings.

In 1909, he moved to Canada and began acting.  He began going by his stage name, Boris Karloff.  He never legally changed his name, though, and signed most legal documents William Henry Pratt aka Boris Karloff.

The role that made him a star was Frankenstein’s monster in the 1931 film Frankenstein.  The costume and physical demands of the role caused permanent back damage. Boris had 3 surgeries and would suffer from back pain the rest of his life.

Though his main genre was horror, in which Boris usually played the monster, he spent much of the 1940s and 50s on the Broadway stage.  The character of Jonathan Brewster in Arsenic and Old Lace was written for Boris. The character had plastic surgery and now looks like Boris Karloff.

Boris is also remembered for narrating and voicing the title character in the 1966 television special, How the Grinch Stole Christmas.

In 1960, Bobby was a struggling actor and comedian in Los Angeles when he joined a band called The Cordials with guys he ran into in LA that he knew growing up in Massachusetts.  They began performing a song called Little Darlin’. In the middle of the song, Bobby performed a monologue as Karloff.

In 1962, Bobby, who many called Boris due to his uncanny impression of Boris Karloff, and his bandmate, Lenny Capizzi, wrote the Monster Mash.  The song was released on August 25, 1962 and reached #1 on the Billboard chart in October.

Boris and Bobby happened have a mutual friend who told Boris how much Bobby admired him.  Boris sent a message to Bobby telling him that he liked the song very much. Bobby said it was the greatest compliment he ever could have gotten.

Mysteriously, the footage of his performance has been lost.  The rest of the episode can be seen online, but the Monster Mash section of the episode is missing.

The closest that we will ever come to seeing Boris’s performance are re-enactments created by YouTubers using reel-to-reel audio recovered from the episode.