In 1912, prospectors struck oil, and a lot of it, just west of Burkburnett, a tiny town in north Texas.

The oil field brought 20,000 new residents to Burkburnett and the surrounding area.  The nearby city of Wichita Falls was where many oil companies set up their offices. One of these office buildings was the Newby building on the corner of 7th and La Salle street.

It had been built in 1906 by Augustus Newby.  He rented out a portion of his building to the Wichita Falls Oil Company owned by J. D. McMahon.

In 1919, McMahon saw the town was in need of more office space and the empty lot next to the Newby building seemed like a great spot.  It was across the street from a bustling hotel. The Newby-McMahon building would be a 480 foot tall high rise housing retail, office and apartment spaces.

Investors were shown the plans and they quickly signed off on them. McMahon raised $200,000 (over $2.9 million today) and construction began.

It ended almost as fast as it began.  The finished building was 4 stories tall, 10 feet wide and 18 feet deep. 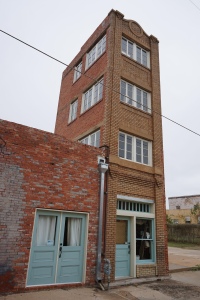 The elevator couldn’t even be installed, because there wasn’t room for it.

By the time the investors discovered their mistake, McMahon was long gone.  After reviewing the plans, they realized that they had been drawn to square inches instead of square feet.  The building stood just 480 inches tall.

The irate owners planned to sue, but a local judge reviewed the plans and McMahon had delivered exactly what was signed off on.  Looking back on it, no one could ever recall him saying out loud that the building would be 480 feet tall. The only thing McMahon hadn’t done to the letter was secure permission to build on the land, but it was owned by Newby’s niece and she allowed the investors to keep their property.

Each 12 foot by 9 foot floor was rented out as office space, with just enough room for one desk in each.  No stairwell had been built, so the upper floors were accessed by exterior ladders.

In 1920, it was featured in a Ripley’s Believe It Or Not! cartoon, where it was first called The World’s Littlest Skyscraper.  The name has stuck.

The building was closed when the oil business slowed down and then the depression hit.  A fire in 1931 left the building just a brick shell.

Several times the building was scheduled for demolition, but Wichitans were attached to their tiny skyscraper.

In 1986, it was given to the Wichita County Heritage Society who sold it in 2000 to the architectural firm Bundy, Young, Sims and Potter.  They partnered with Marvin Groves Electric and remodeled the building. An interior staircase was installed, even though it takes up 1/4 of the square footage of the building.

The Newby-McMahon building is still standing and can sometimes be toured.  It has changed hands several times. The last few owners have used the Newby building as an antiques store and the wife of one of the owners used The World’s Littlest Skyscraper as an art studio.

It was named a historical landmark by the National Historic Register in 2004.