Warning: This post contains images that some may find disturbing.

Until it was outlawed as a form of assisted suicide, hundreds of Buddhist monks attempted to become Sokushinbutsu (Buddha in the flesh or Buddha in this body) through self-mummification. About 24 were successful. Their remains date from the 12th to the 20th century. 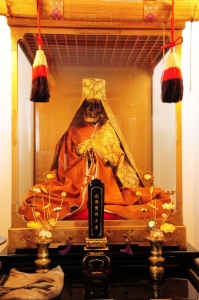 It is believed that the first attempt at Sokushinbutsu was by Shōjin in 1081. When the body was inspected, there were signs of decay, so the process was deemed unsuccessful and Shingon Buddhist monks spent the next 100 years perfecting it.

More attention was drawn to the practice in 1975 when the 550 year old mummified corpse of Sangha Tenzin was unearthed in the Himalayas. The shrine around him collapsed, exposing his body. 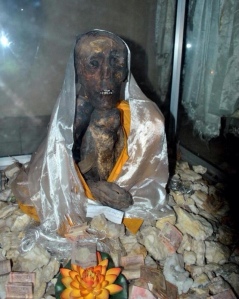 The process of self-mummification is a 3000 day (over 8 year) process. The first step is to remove cereal, wheat, rice and soybeans from the diet. Monks followed a stringent diet during the first 1000 days called mokujikyo (tree eating) that consists of nuts, berries, pine needles and tree bark. They wean themselves from these foods slowly in an effort to burn off all muscle and fat. Many monks repeated the first 1000 day cycle if they felt that they were not ready for the next step.

Those that were, spent the next 1000 days eating herbs and cycad nuts while drinking urushi tea (urushi is often used to make lacquer). This eliminates the moisture and nutrients in the body and keeps bacteria and invaders (like maggots) from hosting there after death. 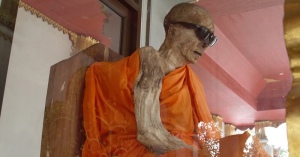 The last days of the monk’s life were spent in a tiny burial chamber just large enough for him to sit in lotus position. The chamber was buried in the ground. A bamboo pole was inserted for air and a bell was rigged to the box. Each day, the monk would ring the bell to signal that he was still alive. When the bell stopped ringing, the bamboo pole was removed and the body sat in the box for another 1000 days.

When the body was uncovered, if the mummification process had been a success, the body was placed in a shrine. If there was any sign of decay, the body was returned to the hole and buried. 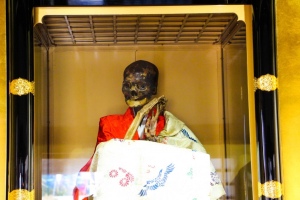 Shinnyokai is the most celebrated of the Sokushinbutsu. His robes are changed every 6 years (others are changed every 10 or 12 years) and the clothing removed from him is placed in amulets and sold at the shrine. These amulets are said to have healing powers and bring good luck. 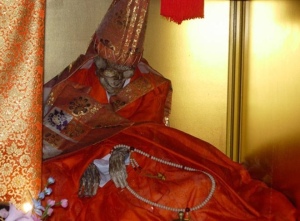 Tetsumonkai mummified himself in 1829 at 71 years old. He sits in state in Churenji. Tetsumonkai’s life is well documented. He was just an ordinary man who killed a samurai and became a monk to protect himself from being arrested. Later, when he visited the city of Edo, he learned that many people in the town had taken ill with an eye disease. He offered up his own left eye by gouging it out as a sacrifice to end the suffering. Before mummifying himself, he was head priest and in charge of the Sokushinbutsu at Honmyōji.

The practice of self-mummification was made illegal in Japan in 1877, but the last known Sokushinbutsu, Bukkai Shonin, died in 1903. He was exhumed in 1961 and showed little to no signs of decay. 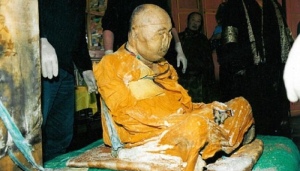