Bill Durks was born April 17, 1913 to “normal” parents, but one look at Bill, and you knew he was different.

Frontonasal dysplasia is a cleft of the entire face. Bill appeared to have 2 faces. His nose was split into two halves and there was a deep indentation between his eyes. At birth, Bill’s eyes were sealed shut and he underwent an operation to open them.

The Durks were embarrassed by their son’s appearance and he wasn’t allowed to go to public school. The family were sharecroppers who couldn’t afford to send their son to private school, so Bill spent his childhood working.

Eventually, a carnival came to town. When the workers saw him, they invited him to travel with them. He could make more as a traveling performer than he ever could working on the farm, so he decided to go.

Bill traveled the country as the Two Faced Man. He would often paint a third eye into the divet between his actual eyes and perform as the Three Eyed Man. He said that people never noticed it was fake because people had trouble looking at him. (The irony of the 3 eyed man was that Bill was blind in his right eye, so he was really a 1 eyed man.)

It wasn’t easy going for Bill. He couldn’t read and didn’t always understand the contracts that he signed, so he was taken advantage of.

The more he traveled, the more his fellow performers came to love him, and they took him under their wing, even teaching him how to read.

One woman took more of an interest in Bill than the others. Mildred, who performed as The Alligator-Skinned Woman suffered from a rare skin disease called ichthyosis that caused painfully dry, scaly skin. 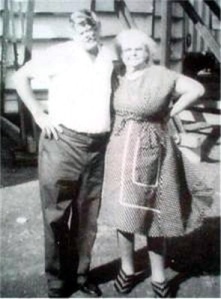 The two fell in love and were married. They continued to work the sideshows together. Bill was a hard worker and would help set up and tear down the tent for extra pay.