Skip to content
icantbelieveitsnonfiction Blog Posts May 7, 2019May 7, 2019 2 Minutes

Katie Brumbach was born in the back of a circus wagon to Philippe and Johanna Brumbach on May 6, 1884.

Her parents were both performers in the Bavarian circus. Touted as strong people, Philippe is said to have been able to lift 500 pounds with just one finger. His wife had 15 inch biceps.

Katie was one of 14 children, but she was definitely the strongest. At the age of 2, she was already performing with her parents. She would do handstands on her father arms and became a very talented wrestler.

Philippe would offer 100 marks (the equivalent of $700 today) to anyone who could beat Katie at wrestling. She wrestled her entire life undefeated.

In 1900, an acrobat named Max Heymann took Philippe’s challenge. He later said that all he remembered was entering the ring, then seeing the blue sky. It was love at first sight. The couple married soon after and remained so for 52 years. Max became a part of Katie’s act. She would lift him over her head with one arm and swing him around.

While still newlyweds, Max and Katie took their act to New York where, as a publicity stunt, Katie challenged any member of the public to a weightlifting showdown.

A very famous strongman named Eugene Sandow took the challenge and Katie was afraid that she might have made a mistake.

Katie began by lifting a weight. Eugene would then lift the same weight. This went on, tit for tat, until Katie lifted 300 pounds over her head with one arm. Eugene could only get the weight to his chest. Shortly after, Katie changed her name (and Max’s) to Sandwina, a play on Sandow. This may have been in homage or in jest. She began advertising herself as The Great Sandwina. 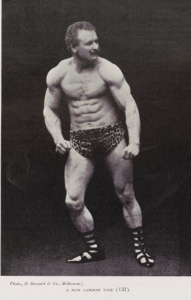 Unlike other strong women at the time, the press was quick to note that Katie was equal parts brute strength and femininity.

When Katie joined the Barnum and Bailey Circus, they held a press event where she was measured by doctors. They declared her 5 foot 9 inch 210 pound body with a 44 inch chest and 29 inch waist to be the standard of a “perfect woman.”

Max and Katie had 2 sons. One went on to be a heavyweight boxer and the other was an actor. Katie continued performing until the day she gave birth both pregnancies and incorporated her children into her act as they were growing up.

Katie was a strong supporter of the 19th amendment and was sometimes called Sandwina the Suffragette.

Katie’s routine at Barnum and Bailey’s included lifting horses and carousels. She also supported the weight of a bridge with her torso that men would march across double file before a carriage would be driven across. 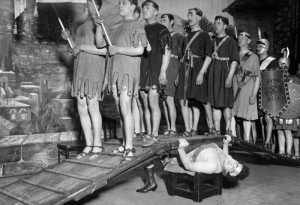 She retired at 61 and Katie and Max opened a restaurant in New York City. A placard outside stated that the establishment was owned by The Strongest Woman in the World. Max cooked and one of the couple’s sons tended bar. Katie played hostess, bending horseshoes and breaking iron chains upon request. When the crowd got too rowdy, Katie would call for Max to open the door and she would physically throw the offenders out of her bar. The police had to warn her, more than once, not to hurt her customers too badly.