A call came into the Mama Mia Pizzeria about 1:30pm. The customer lived on the edge of town. Even though it was near the end of his shift, 46 year old Brian Wells headed out with the order.

Brian was born November 15, 1965. He dropped out of high school when he was 16 years old and started working at Mama Mia. Despite his poor grades in school, Brian was very intelligent. He and his brothers and sisters were raised by their widowed mother.

When Brian arrived to the address on Peach Street, it wasn’t a house. It was a television transmission tower.

Two men strapped a homemade bomb around Brian’s neck. He was given several pages of handwritten instructions and a shotgun fashioned to look like a cane.

Brian was sent to the PNC Bank at 2:20pm with a note that demanded $250,000 and gave the teller a time limit of 15 minutes. Brian was informed that there was no way they could get the vault open in so little a time. The teller gave him $8,701. A little after 2:30pm, Brian left the bank, grabbing a lollipop on the way out the door. 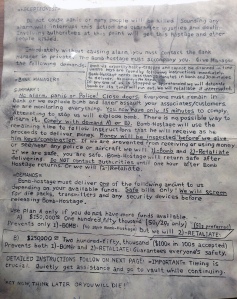 The instruction letter told him to proceed to the McDonald’s next door and look for a rock under the drive-thru sign.

The bank contacted the police who saw Brian by his car and arrested him. He told police that 3 “black people” had done this to him. This was later proven to be false.

Police handcuffed Brian and contacted the bomb squad at 3:04pm.

Brian told the police that time was running out. A crowd started to form trying to figure out what was going on. Brian asked the police, “why isn’t anyone trying to get this thing off me?” [1]

The case would come to be known as the “collar bomb” or “pizza bomber” case.

The letter in Brian’s car turned out to be a scavenger hunt that allegedly led to the keys and combination to unlock the bomb around his neck. The note said that the bomb could not be disarmed and would need to be left in a safe place to explode when removed.

Police followed the clues in the note and determined that there was no way that Brian could have finished it in time. He was doomed.

Police were at a loss as to who had done this until William Rothstein contacted them. He said that they would find a body in the freezer at his home. He lived next to the television tower where Brian had arrived with the pizza order. 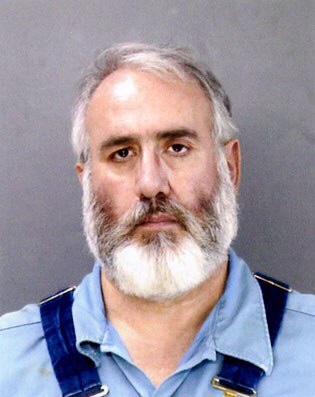 He told police that he had been so distraught that he had attempted suicide. The first line of a suicide note found in his home said that he had nothing to do with Brian’s death. This was the first indication to police that the two crimes were linked.

When questioned by police, Willam said the body in his freezer belonged to James Roden. He was the current boyfriend of William’s ex-fiancée, Marjorie Diehl-Armstrong.

He claimed that Marjorie had killed James and then asked William to help her hide the body.

Police arrested Marjorie, who confessed to Brian’s murder and implicated William. She was convicted and sentenced to 20 years for James’s murder. 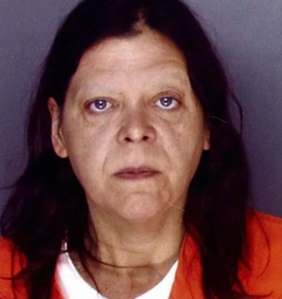 A fellow inmate told police that Marjorie claimed to have killed James because he knew about the plot to kill Brian. James had threatened to tell police.

Marjorie told the same inmate that William had helped to build the bomb and that she needed the money from the bank to pay a hit man to kill her father.

She wanted her inheritance before he gave away all his money to friends and charities.

Another man, Kenneth Barnes, was implemented in the crime. He was a friend of Marjorie’s and placed himself at the scene when the bomb was strapped to Brian’s neck.

He claimed that Brian was in on the scheme. He said that Brian believed that the bomb would be fake. When Brian arrived at that television tower, Kenneth said that he was told that the bomb was real. Brian got scared and tried to run away. Kenneth claimed to have punched Brian so that he could be held down and the bomb could be attached.

Information also came to light that Brian had been told to implicate “some black guys” if he got caught so that he wouldn’t be suspected of participating.

Marjorie and Kenneth were charged with Brian’s murder. It was stated openly in court that Brian was a participant in the plot. His family does not believe this to be the truth.

Marjorie was in prison for killing her current boyfriend and had been suspected of killing her husband and first boyfriend. She was tested several times before she was considered competent to stand trial. She suffered from multiple-personality disorder and was a hoarder. In fact, when police searched Marjorie’s home after the suspicious death of her first boyfriend, they found 1100 pounds of rotting cheese and butter in her home.

When she was arrested for James’s murder, it took police 4 days and 6 dumpsters to clear out Marjorie’s home while looking for clues.

Marjorie and Kenneth were convicted of conspiracy, carrying a firearm during a crime of violence and armed bank robbery.

William died of cancer before he could be brought to trial.

Marjorie died on April 4, 2017 at the age of 68. She was also diagnosed with cancer before her death.

Kenneth is currently serving 270 months and will be released in 2027.

It is possible that Brian had been chosen as a victim because he was easy going and needed money. Jessica Hoopsick was a prostitute that Brian would give drugs in exchange for sex. She claimed that she suggested him to Kenneth who gave her $5,000. She was never charged in the crime.

One other possible co-conspirator was Floyd Stockton. He may have had information that he traded to the FBI for immunity. However, he was never called to testify at any trial. Floyd is said to have admitted to being the person who actually locked the bomb on Brian’s neck.

Three days after Brian’s death, Rob Pinetti (who was also a delivery driver for Mama Mia and a friend of Brian’s) died in his home of a drug overdose. He was scheduled to be questioned by police the following day. Floyd was his roommate.

You can read the handwritten letter found in Brian’s car here:

You can watch a video taken at the scene when the bomb went off here (WARNING: this video is NOT suitable for everyone. Viewer discretion is advised):