23 year old Joe Arridy walked between Warden Roy Best and Father Albert Schaller on his way to the gas chamber. 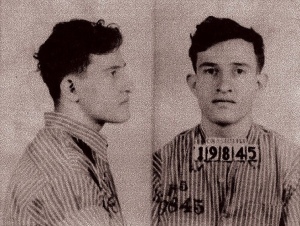 Joe had been convicted as an accomplice for the murder of 15 year old Dorothy Drain and the attempted murder of 12 year old Barbara Drain. Joe was smiling as he entered the gas chamber and was strapped down.

Joe was born April 29, 1915 to Henry and Mary Arridy in Pueblo, Colorado. Neither of his parents spoke English. They had immigrated from Syria. They knew their son was different early in his life. He attended public school for one year. The principal said that Joe couldn’t return to school because he couldn’t do the work that was required of him. This was because Joe had an IQ of 46.

At the age of 10, Joe was committed to the Colorado State Home Training School for Mental Defectives in Grand Junction, Colorado. Joe didn’t know his alphabet or colors. He didn’t know the days of the week and spoke in short, choppy sentences. He was labeled an “imbecile” by a psychologist at the school.

We wouldn’t refer to a child as an imbecile now, but, at the time, that was a clinical term for someone who functioned on a 5 or 6 year old level.

Joe stayed at the school for about a year before being released to go home with his father, but returned in 1929.

In 1936, Joe ran away from the institution and hopped a train. His whereabouts were unknown until he was arrested for vagrancy on August 26 in Cheyenne, Wyoming.

Just 11 days before in Pueblo, Colorado, Dorothy and Barbara were beaten with an ax while they slept.

Sheriff George Carroll claimed that Joe confessed to the beatings. George told the press that Joe had confessed to beating the girls with a club. 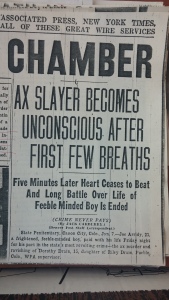 The police had already arrested Frank Aguilar for the murder of the young girl. They even found the murder weapon, an ax, in his home.

The morning after his “confession,” George claimed that Joe had changed his story. He was now saying that he had beaten the girls with an ax and that he had been with a man named Frank. Frank refused to talk.

Frank was tried and convicted of the murder and attempted murder. He even told his lawyer during his trial that he was guilty. He attempted to change his plea from not guilty to guilty by reason on insanity, but that judge denied his request. Frank was sentenced to death. Joe was never mentioned in Frank’s trial.

On April 17, 1937, Joe was found guilty as an accessory to the crimes and was sentenced to death. He was sent to Colorado State Prison.

At the prison, Warden Roy took a liking to Joe. He called him “the happiest man who ever lived on death row.” Roy brought Joe books and toys.

Joe was surrounded by men that had committed murder and dealt drugs, but everybody liked Joe. They would play his childlike games with him.

When Roy gave Joe a toy train for Christmas in 1938, he played with it endlessly. He would wind it up and send it down the corridor toward the cell of Norman Wharton. Norman was behind bars for killing a police officer. The train would pass by the cells of the other prisoners on it’s way to Norman. When it reached him, Norman would wind it up, turn it around and send it back to Joe. This would go on for hours.

Sometimes, men in adjacent cells would knock the train over as it passed. Joe would laugh and yell “A wreck! A wreck!” The other prisoners or a guard would set the train upright to continue on it’s path. The men were more than happy to make Joe’s stay as easy as possible.

Gail Ireland, an attorney from Denver, worked hard on Joe’s case. He was able to stay the execution 9 times, but in January 1939, Joe’s time was up. The Colorado Supreme Court held up the conviction and Joe’s death sentence was to be carried out.

On January 6, Joe was offered a last meal, but both the Warden and Father Albert knew that he didn’t know what this meant. 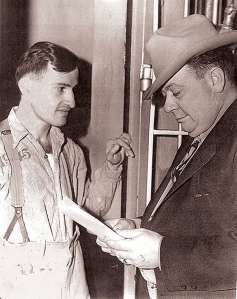 Joe asked for ice cream and he ate tons of it, all day. Father Albert came to read him his last rights. He had to be given the prayer to repeat just two words at a time. That’s all that Joe could remember.

Joe asked to take his train with him to the gas chamber. When it was explained to Joe that he wouldn’t be coming back, he said, “No, no, Joe won’t die.”

When Father Albert told Joe he could trade his train for a golden harp in heaven, Joe told him to give it to his friend (and jailmate) Angelo Agnes.

The men walked Joe to the gas chamber. He smiled until he was blindfolded, but the Warden took his hand and Joe’s smile returned. The Warden and the priest left the room and the deed was done. 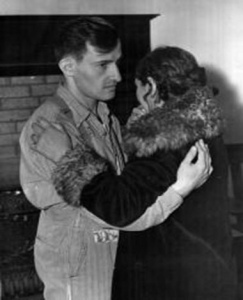 On January 7, 2011, Colorado Governor Bill Ritter granted Joe a full pardon for his crimes. The pardon came 72 years after his execution. Governor Bill said that evidence indicated that Joe was coerced into confessing and that he had probably not even been in Pueblo, Colorado at the time of the murder.

This posthumous pardon is the first in the history of the state of Colorado.

If you would like more information about this story, I encourage you to visit:

One thought on “Joe Arridy”