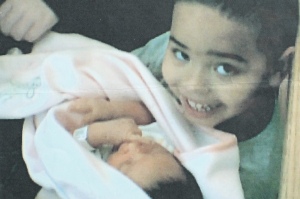 Andre had 3 knives in his pocket.  He stabbed Laura, Andre Jr. and Leyha, each with a different knife.  He attempted to cut out the hearts of his three victims.  He was successful with the two children, but he cut out a portion of Laura’s lung thinking it was her heart.

Andre drug Laura into her living room, stabbed himself in the chest and laid down next to Laura hoping to die.  His injuries were not severe enough to kill him, so he put the organs in his pocket and walked 5 miles to his home.

Later the same day, Andre walked into the police department and told authorities that he had killed his wife.  He was taken to the hospital where he was treated and released before being booked into jail.  He told police that he did what God wanted him to do.  He also asked if he would be forgiven for what he had done.

Andre was born on March 17, 1983 to Rochelle and Danny Thomas.  His father wasn’t around often and his mother had 4 other sons.  The dilapidated home that the boys lived in did not have electricity or running water.

The boys attended church regularly as children and Andre was fascinated by the bible.  When Danny was around, he and Andre often worked on cars.  Andre loved to take things apart and put them back together.  He did well in school until the 3rd grade.

In 1993, Andre began showing signs of schizophrenia.  He told classmates that he heard voices, specifically angels and demons that fought each other in his head.  When the voices became too strong, Andre turned to drugs and alcohol.  His first suicide attempt was while he was still in elementary school.  In high school, he was arrested for the first time.

Andre was not the only member of his family to show signs of mental illness.  One of his brothers was also diagnosed as schizophrenic and another brother is also mentally ill.

Andre was a freshman in high school when Laura got pregnant.  He dropped out shortly after and began working to support his family.  The couple got married on Andre’s 18th birthday.  The marriage lasted 4 months.

When Andre and Laura broke up, his psychosis deepened.  He became more obsession with the Bible and his erratic behavior intensified.  He often put duct-tape over his mouth and refused to talk for days at a time.

Laura moved on with a man named Bryant Hughes and got pregnant with Leyha.  Andre hung on to the idea that he and Laura would get back together. That would never happen.

A week after the murder, Andre was poring over his bible in jail when he read Matthew 5:29.  The verse says, “If your right eye causes you to stumble, gouge it out.”  Andre did just that.  In the hospital after pulling his eye out, he asked repeatedly for Laura.

Andre was found guilty of capital murder and was sentenced to death.

In prison, Andre became more and more disconnected from reality.  He attempted suicide multiple times.  In December 2008, Andre removed his other eye and ate it.  After this, Andre was moved to the Jester IV Unit where mentally ill inmates are housed in Texas.

Andre’s case and his subsequent behavior has incited a heated debate about the legality of executing the mentally ill and the criminal justice system in Texas and nationwide.

One thought on “Andre Thomas”