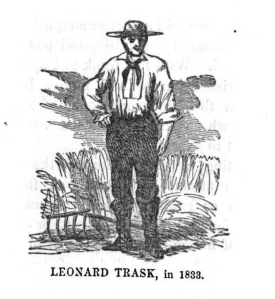 Leonard, like his father, was a farmer for much of his life. He was also a brick maker and logger, among other trades.

He experienced much success in his young life. By 1830, he was married to Eunice Knight and owned a farm in Peru, Maine. The couple raised 7 children.

In 1833, Leonard was riding his horse when he came upon a hog. The frightened swine ran under the legs of Leonard’s horse causing it to stumble. Leonard was thrown from the horse and landed on his neck and shoulders. 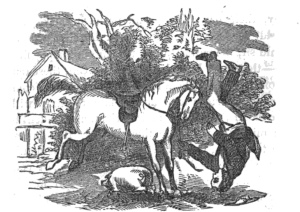 It took months for him to recover from his injuries and, even then, Leonard could only work an hour or so before needing to rest.

The next year, many of the cattle on his farm died due to disease. Because he had been bedridden for so long, the farm had not been properly tended. Now, with much of his cattle gone, Leonard needed to return to work to make money.

In 1834, he went to work as a logger. The conditions were horrible. Leonard was sick much of the time he was working and the pain in his neck and back became unbearable. Each morning, he would pull himself out of bed with a rope and he ate his meals while walking around because sitting was too painful.

By 1835, his back had begun to bow and his shoulders had begun to curve forward. He lived like this until 1840 when he had an accident on the farm. He fell off of a stack of hay and broke his collarbone and ribs. He was again bedridden and suffered a debilitating fever.

While recuperating, he popped his upper spine (like popping your fingers). This was caused by the separating of the bones in his neck and back. After this, his back began to bow more drastically and his head began to curve toward his chest. The curve was so drastic that his shoulders were now the tallest part of his body. The once 6 foot 1 inch man, now stood just 4 feet 10 inches. He had also lost a considerable amount of weight. 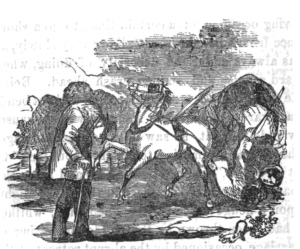 By this time, his head was pointed at his chest and he could only see in front of him if he leaned backwards.

Leonard visited 22 different doctors who tried an array of different treatments. He was bled, leeches were attached to him, his body was stretched and a number of different ointments and tonics were prescribed. Nothing worked.

By this time, Leonard could no longer work on the farm and was making items that he attempted to sell door to door and on the street. He had to abandon this attempt to make a living because he was being harassed and attacked due to his deformity.

He wouldn’t accept charity and refused to join the sideshow, but he still needed money to feed his family, so he co-wrote an autobiography called A Brief Historical Sketch of the Life and Sufferings of Leonard Trask, the Wonderful Invalid. He traveled around selling his book for 15 cents.

In 1858, he was thrown from a coach that turned too sharply. He was cut very badly and a piece of iron penetrated his skull. His neck and back were further injured permanently pushing his chin into his chest. This caused Leonard to have trouble breathing. 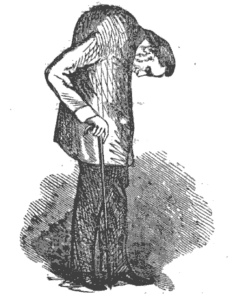 Leonard died on April 13, 1861. He was diagnosed, after death, as having suffered from ankylosing spondylitis, a rare type of arthritis affecting the spine. Leonard was the first documented case of the condition in the United States.

One thought on “Leonard Trask”