He was an artist and he ran a design firm until he was 33 years old. During this time, he claimed to have had several paranormal experiences. One of these experiences occurred after the death of his niece, Hannie, whom he had never met. He said that he had vision of her several nights in a row. He attempted to draw the image of her he had seen. The same kind of thing happened with an aunt that he had never met. When the drawings were compared to pictures of the women, the likeness was uncanny.

He would also often wake up to discover that he had drawn pictures in his sleep.

At 33, he claimed to have realized that his body was invulnerable. He quit his job and changed his name to Mirin Dajo, which meant wonderful in Esperanto. He began hanging out in pubs, demonstrating his new found abilities. 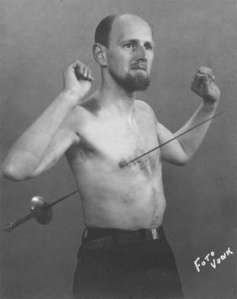 Mirin could push objects, like swords and spears, through his body and out the other side. There was no blood and Mirin seemed to feel no pain.

He began performing nightly at the Corso music hall in Zurich, Switzerland with an assistant. The assistant would push the object through Mirin’s body who stood motionless and silent. Eventually, to increase the spectacle, hollow rods were pushed through Mirin’s body and water was poured through the rods making him into a human fountain. 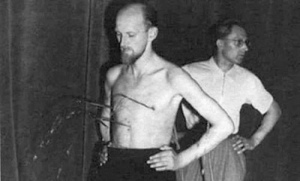 People in the audience were fascinated and appalled by the spectacle. In venues where dinner was served with the show, waiters collected the bill upfront because so many people fainted and were carried out before it was over.

In 1947, Mirin was invited to the Zurich Cantonal Hospital to be examined by skeptical doctors and journalists.

A rapier was plunged through Mirin’s body and he was examined. He even walked to the X-ray room and an X-ray was taken to prove the blade went all the way through. He was invited to be seen by other doctors in other cities where he would allow the doctors to spear him themselves. He even went on a jog around the hospital grounds while impaled to prove that he was in no pain.

The reason that Mirin was silent during his performances was in interesting one. He had a message to spread and he knew if he showed people what his body could do, they would listen. He believed that people should be less materialistic and wanted to spread a message of love and peace. When he traveled in European countries, he needed a license to perform. These licenses were granted to him only for performance. He was not allowed to speak at public functions where people paid admission.

Mirin believed that he had guardian angels that followed him around and told him what to do. They gave him physical tests that he had to perform to remain invulnerable. These tests often involved ice and fire being applied to his body. His assistant said that in each case, his skin never even turned red. Allegedly, he was also pierced with rusty and poison-laden swords with no ill effects.

Mirin claimed his abilities could be attained by anyone in the right frame of mind. He believed that he felt no pain because he had trained himself to feel no pain. Mirin also claimed to be telepathic and a healer.

In 1948, Mirin ate a steel needle as commanded by his guardian angel who directed that he have it surgically removed. A doctor performed the surgery the next day.

A little over a week after the surgery, Mirin laid down in his assistant’s apartment. His assistant assumed he was meditating. 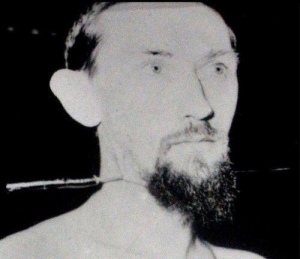 The assistant checked on Mirin the next day. He was unresponsive, but had a pulse, so the assistant left Mirin alone to continue meditating.

On the third day, when Mirin hadn’t moved, the assistant’s wife became worried. She asked her husband to check on Mirin. He had no pulse. Mirin was pronounced dead on May 26, 1948 at the age of 35. He had been dead approximately 12 hours.

His official cause of death was a rupture of the aorta, possibly caused by the needle he had swallowed. 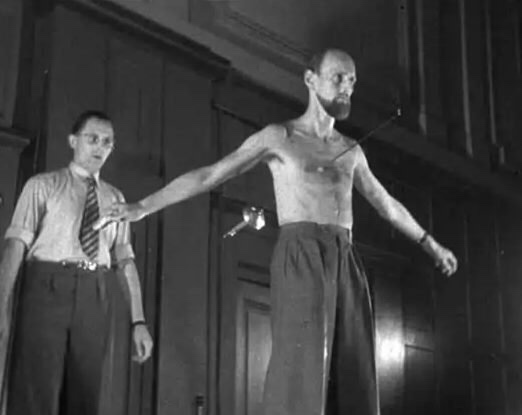 Some believe that Mirin’s extraordinary ability is actually explainable by medical science. They believe that he created fistulas by piercing the skin and leaving the object in the hole created until it healed, then pushing the object farther into the body and letting it heal again. They believe that he continued doing this until the object pierced the other side. It’s the same concept as an ear piercing. A metal rod or similar object would have to be kept in the hole to keep it from closing up. The rod was then removed shortly before performing.

Others believe that he was truly invulnerable.