Jose Ramón Gil Samaniego was born February 6 1899 to Mariano and Leonor Samaniego in Durango, Mexico.  Everyone called him Ramon.

Ramon’s father was a successful doctor and his mother was a stay at home mom of 13 children.

The family escaped Mexico during the Mexican Revolution in 1913.  They moved to Los Angeles, California.

When Ramon was just 18, he began acting in silent films.  His first film was Joan the Woman. He started out as an extra and moved up to bit parts.  He worked several jobs during this time to pay the bills, including being a grocery clerk, piano teacher, usher, busboy and singing waiter. 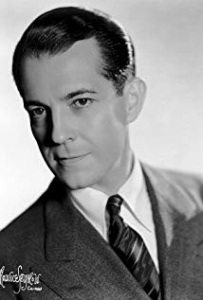 He changed his last name to Novarro during this time.  He got the name from his best friend, Gabriel Navarro, grandfather of Dave Navarro of Jane’s Addiction and The Red Hot Chili Peppers.  A secretary at MGM typed the name as Novarro and he was stuck with the misspelling.

Ramon landed the role that would make him famous in 1923.  The movie was called Scaramouche.

The greatest movie of his career was the 1925 release of the silent film version of Ben-Hur.  The movie was the most expensive silent film ever created. 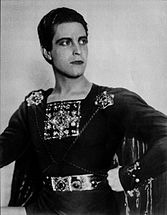 He not only played lead romantic roles, he often played in high-action films.  He shared the screen with famous actors, such as Joan Crawford.

The move from silent films to “talkies” was difficult for most silent film actors.  Ramon had an amazing singing voice and could have done well in talking films, but the scripts chosen for him by MGM did not boost him to the level of stardom he was used to.  His best talking film was Mata Hari, in which he starred with Greta Garbo in 1931.

His contract with MGM was not renewed in 1935.  He continued to act sporadically in smaller and smaller film roles and, eventually, on television until his death in 1968.

He had made enough money in the 1920s and 30s to live comfortably for the rest of his life.

Despite his “Latin Lover” facade, Ramon was homosexual.  At the time, homosexual activity in California was illegal.  Ramon also grew up in a strict Roman Catholic household. This left him conflicted and caused him to both hide and feel ashamed of his true feelings.  He battled this turmoil by abusing alcohol.

MGM was aware that Ramon was a homosexual and suggested that he marry anyway.  He refused. When Ramon and William Haines, the first openly gay movie star, went to a male bordello one night, Louis B. Mayer had the place shut down.

On October 30, 1968, Ramon received a phone call at his home from 22 year old Paul Ferguson and 17 year old Tom Ferguson.  The brothers had gotten his number from a prostitute that Ramon had hired. Ramon was known to do this later in his life.  Not all of the encounters ended in sex, but all involved heavy drinking and partying. The two men were invited over.

Paul and Tom had heard that Ramon kept a significant amount of cash in his home and they planned to rob him. 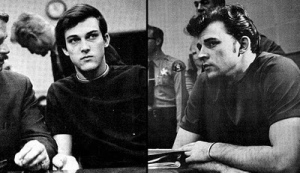 When they arrived, the men tied 69 year old Ramon’s hands behind his back with an electrical cord.  They asked him where the money was. Ramon told them, truthfully, that he never kept money in the house.

The men beat Ramon then went looking for the money.  They left with just $20 found in the pocket of Ramon’s bathrobe.

The men had beaten Ramon with a walking cane.  They carved the letter N or Z into the side of his neck.  To cover their crime, they wrote the name Larry on the sheets next to Ramon and put the pen in his hand.

On Halloween morning, Edward Weber arrived at Ramon’s home for his secretary job.  Normally, the door was unlocked by the time he got there, but this morning he had to use his key.

The house was a mess.  Ramon’s glasses were broken on the floor next to a bloody footprint.  Edward searched the house for Ramon, finally finding him in his bedroom.  He called the police, Ramon’s brother and his priest.

Ramon was naked in his bed.  There was blood on the floor and ceiling and there was a tooth on the floor next to the bed.

The official cause of death was suffocation due to massive bleeding due to fracture of the nose and laceration of the lips and mouth.  Ramon had choked to death on this own blood. 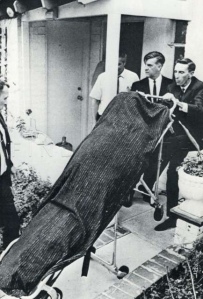 Phone records revealed that a 48 minute phone call had been made from the house at the time that Ramon had been killed.  The call had been made to Brenda Metcalfe. She told officers that she had been talking to Tom and could hear screaming in the background.  Police officers arrested Paul and Tom at the home they shared with Paul’s wife and children. Paul told Tom to tell police that he had killed Ramon because he was a minor and couldn’t be sentenced to death.

The brothers were quick to blame each other.

Paul claimed that the three men had dinner and drinks before he fell asleep on the couch.  He was awakened by Tom who told him that he had killed Ramon. Paul said that Ramon had promised to set him up in the movie business, so he wouldn’t have wanted him dead.

Tom told the court that Paul’s story about dinner and drinks was correct, but that was the end of the truth.  Tom’s account stated that he asked Ramon if he could use the phone to call his girlfriend. Ramon directed him to a guest room and he called Brenda.  After the phone call, Paul was looking for him wearing nothing but his underwear that were covered in blood. Tom found Ramon in his room, beaten but still alive.  He cleaned him up and put him in bed.

Before Tom could finish his testimony, Paul began screaming at him to tell the truth and threw a pen at him.

Tom continued that Paul beat Ramon with the cane as he tried to get out of bed.  Ramon slipped on blood on the floor and was knocked unconscious. The two men then tied him up and put him in the bed.

Neither of these stories were completely the truth, but that didn’t seem to matter to the defense teams.  Paul’s lawyer described Ramon as an accident walking around looking for a place to happen. Tom’s lawyer called Ramon a queer and criminal for his repeated and illegal homosexual acts.

Both Paul and Tom were sentenced to life in prison.

In 1974, Paul told a reporter that he had killed Ramon.  This confession helped Tom to receive probation in 1976. He was sent back to prison for several months after violating the terms of his parole.  He was arrested multiple times before his death on March 6, 2005.

Paul took writing courses in prison and volunteered at the firehouse.  In 1975, he won a prison writing contest that earned him $100. He was released on parole in 1978.  He was arrested in 1989 for rape and sodomy and was sentenced to 30 years. His release date is in 2022.