45 year old Bruce Pardo was in a rough spot. He was broke and without a job. He had two failed major relationships in his past and he was angry.

On Christmas Eve 2008, he took drastic action. He put on a Santa suit and drove to the home of his former in-laws, Joseph and Alicia Ortega.

The Ortegas were hosting 25 family members in their home. The adults were in the dining room playing poker while the kids were in the back of the house playing video games. One of the Ortegas’ grandchildren, 17 year old Michael, was upstairs on the computer.

An 8 year old granddaughter saw someone walking up the driveway and he was carrying presents. He knocked on the door. When she realized it was Santa, she ran to let him in.

When she opened the door, Bruce shot her in the face with a 9mm handgun. The little girl fell to the ground. Bruce entered the house and began shooting at anything that moved.

People were running around the house frantic and many tried to hide under the dining room table.

Several family members recognized Bruce. He was the ex-husband of the Ortegas’ daughter, Sylvia. Their divorce had been finalized on December 18. 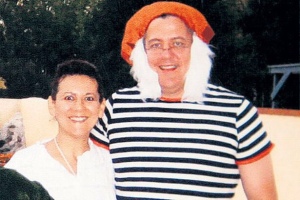 The failure of the Pardos’ marriage could be attributed to many things, but the last straw seemed to be when Sylvia found out that Bruce had walked out on his first family.

Bruce was in his mid 30s when he fathered a child with his then-girlfriend, Elena Lucano. When their son was just over a year old, Elena left him with Bruce while she went grocery shopping.

The toddler made his way outside and into the backyard pool. Bruce found him there, unresponsive. When Elena returned home, she found Bruce holding the tiny unconscious boy in his arms.

They raced him to the hospital and, despite receiving the best care possible, he suffered severe brain damage and would be in a wheelchair for the rest of his life.

Shortly after this, Bruce settled financially with the mother of his child, but walked away, never seeing his son again.

Bruce never told Sylvia about his son. Sylvia, who had 3 children from a previous relationship, had seen Bruce interact with her own children and could never imagine a man walking out on a disabled child. The lies and the callousness of Bruce’s actions were more than she could stand.

Bruce continued his Christmas Eve shooting spree by firing at the Ortegas’ son, James, followed by his brother, Charles. The men attempted to stop Bruce, even after they had been shot.

Bruce then found the group hiding under the table. It included 80 year old Joseph and 70 year old Alicia. They were killed. Bruce finally found his ex-wife and her sister, Alicia. He shot and killed them, as well. 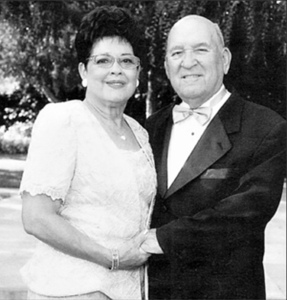 The only sibling to escape the massacre was Leticia. She was the mother of the 8 year old who answered the door. She was able to escape the house with her daughter, who survived.

Leticia ran to a neighbor’s house and called 911.

A 16 year granddaughter of the Ortegas was shot in the back, but survived.

Bruce wasn’t done yet. He opened one of the gift wrapped packages he’d brought with him and produced a homemade flame thrower.

He doused the first floor of the house in racing fuel and set the house on fire. Michael was trapped upstairs and was killed. It took 80 firefighters 1 1/2 hours to control the blaze. 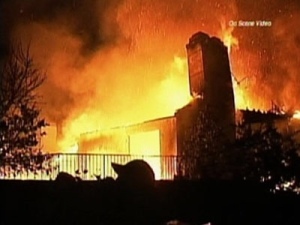 In total, Bruce killed 9 and injured 3 people. He was burned badly in the ensuing fire. He received 2nd and 3rd degree burns on his arms and the pants of his Santa suit melted.

Despite this, Bruce changed clothes. He had to peel the pants off of his body and portions of the polyester stayed in his skin.

He drove to his brother’s house 30 miles away. When his brother arrived home later that evening, he found Bruce dead. He had shot himself.

Bruce had parked his car a block from his brother’s house. When police found it, they discovered that he had rigged the car with explosives set to go off when someone removed the Santa suit from the vehicle.

The bomb was safely detonated by police and no one was injured.

Toxicology reports revealed that Bruce had cocaine in his system on the day of the murders. The media would call the attack “The Covina Massacre.”