Edmund Zagorski was born December 27, 1954 in Michigan. His family was poor. His father wasn’t around and his mother suffered from a brain injury. Edmund had an intellectual disability and dropped out of school. 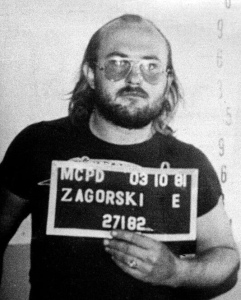 When he met John Dotson in 1983, Edmund was going by the name Jesse Lee Hardin. He scheduled a meeting with John on a farm in Tennessee to negotiate a drug deal.

The two men met on April 23, 1983. John had brought along his friend, Jimmy Porter, because he was nervous to meet “Jesse” alone.

At approximately 5:30pm, gunshots were heard by the owner of the property where the men had met, but he assumed they were deer hunting.

When the bodies of John and Jimmy were found on May 6, it was apparent that the men had been shot and their throats were cut.

Police traced the bullets to a gun owned by Edmund. He was tracked down at a friend’s house in May 1983. He was driving a truck owned by Jimmy.

Edmund did not surrender to police and a shoot out ensued. Several police and Edmund were injured. Edmund eventually admitted to the murders of the two men and was sentenced to death in March 1984. After several delays, Edmund was scheduled to be executed on October 11, 2018.

Despite lethal injection being the common practice at the time, Edmund had requested and been sentenced to death by electrocution.

On October 11, the execution was delayed again while the electric chair was prepared.

On November 1, Edmund was given his last meal. He requested pickled pig knuckles and tails.

Edmund was seated in the electric chair at approximately 7pm.

His last words were, “Let’s rock.”

Edmund dislocated both of his pinkies pulling against the straps during the execution. It appeared to spectators that the first jolt didn’t kill him and a second was administered.